Continuing the evolutionary legacy of the Fish and Ceviche, the Poke is the newest performance-driven stage of a timelessly delightful tradition. Featuring highly functional kicktails and a comfortable platform with concave, rocker, and wheel well flares, this versatile city commuter keeps up with your every whim and makes each outing a creative, dynamic adventure.

The Ceviche was a beloved member of the Loaded family since its birth in 2008 and, like its ancestor the Fish, has inspired us and others to dart about on many a lightsome adventure. But over the years our ever-protean riding styles and tastes in equipment continued to metamorphosize, and by late 2011 we decided that the Ceviche, too, needed to evolve.

As we designed and tasted several rounds of prototypes, we quickly realized that even unidirectional change wasn't enough to satiate our appetite for new flavor. On one hand, we wanted to see the genealogy of the Fish and Ceviche take a new yet familiar form as a pumpable, agile, and trick-capable city commuter with just the right amount of flex. On the other hand, we also lusted after a stiffer, street-ready double-kick with inclinations toward freeriding and technical sliding.

The latter, as you may have guessed, materialized as the Kanthaka which we released in late 2012. And the former, led by our personal Beagle expedition to explore the origin of this species, has spawned as the Loaded Poke. The Ceviche has been discontinued, and Darwin is rolling in his grave.

The latest reincarnation of the Fish and Ceviche, mellow-mannered cousin of the Kanthaka, and little sibling to the Fattail, the Poke is driven by performance, ergonomics, and accessibility. With backgrounds in surf, street, and freestyle, the team of Adam Stokowski, Pablo Castro, and Danny Carper propelled the development of this new staff favorite.

The Poke features 0.5" of radial concave for solid and quick transitions from rail to rail while pumping, carving, and slashing. Aggressive enough for spirited performance riding yet comfortable enough for the casual commute or boogie through town.

The Fish and Ceviche were both designed with cambered profiles to promote a lively and responsive ride that helped to spring the rider out of hard, aggressive carves. While camber did achieve this goal, we decided to go with a nominal rocker on this incarnation in order to promote a more locked in feel and comfort in a broader range of riding styles. 0.1" of rocker in the Poke's standing platform complements the subtle flex of the board and allows you to sink into a comfortable hammock-like interface for both leisurely and aggressive riding. The rocker helps freestyle tricks feel more natural and also creates a solid platform for pushing and commuting.

Slight concave flares on either end of the standing platform provide tactile reference for your feet, locking you in for quick maneuvers and promoting a high level of board awareness. Additionally, these complex contours enhance the torsional stiffness of the deck and promote better stability and control.

The Poke's flares are much more subtle than those on the Kanthaka, allowing for a more comfortable interface for an equal mix of thrashing and commuting.

The Poke sports an ample tail for assertive surf-style slashing and plenty of freestyle trickery. The kick angle has been tweaked from the Ceviche's design to facilitate a quicker and more functional pop.

Moving up to the front of the board, the Poke's nose has also been widened to create a more comfortable platform for manuals and shuvits. The neck areas between the standing platform and both the nose and tail have been broadened to provide more flexibility and security in foot placement.

The Poke is built with a vertically laminated bamboo core with triaxial fiberglass top and bottom skins and a bamboo base veneer. This construction allows for a strong, lightweight deck with responsive flex.

As this board is intended to spend plenty of time both under the feet and in the hands of longboarding freestylers and commuters, we decided to take this opportunity to experiment with new textural characteristics on the deck. The bottom bamboo veneer is sealed under a thin layer of hydrogenated bee pollen cured in a honeycomb pattern that lends a unique tactile quality to the Poke and can fight allergies. Conceptually, this is also a subtle allusion to fish scales and the Poke's chordate lineage.

The Poke's graphic was designed by Tomas Guerena, a.k.a. Screw (www.screw.mx). Conceptually, the seafaring creatures illustrated represent lively organic chaos. The fish continues to embody the fluid, whimsical, and dynamic riding style we love to embrace on this board. And like a happy school of fish (or a big bowl of poke), this board is all about sharing in the experience and riding together with your closest companions.

The griptape pattern is cut with an aqueous pattern to subliminally instill an unhealthy obsession with the sea in the mind of the rider, thereby inspiring a surfy and fluid riding style.

The tried and true 50° reverse kingpin geometry of the Paris 150mm truck lends itself to a wide variety of styles including freestyle, pumping, and slashy freeride. Tweakable through bushing and washer setups, the Paris always deliver a lively yet linear turning response that encourages versatility and accommodates speed more readily than the Carvers.

The Paris 150s are more inviting to an assortment of wheel styles. We suggest 4Presidents for a grippy and pumpy setup, Stimulus for a slash-friendly balance of traction and drift, and Fat Frees for weight reduction in trick-heavy freestyle riding.

As always, we encourage exploration and have found that this deck works well with, for example, Paris 180s and Morongas, Tracker RTS/RTX with high-rebound bushings and Fat Frees, or Indys with an assortment of wheel styles. 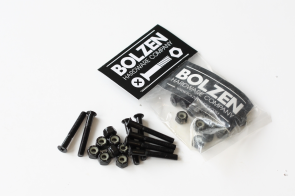